I loved the Swiss with this. It was a nice change in flavor. I used chicken instead of Turkey though because that is what I had. 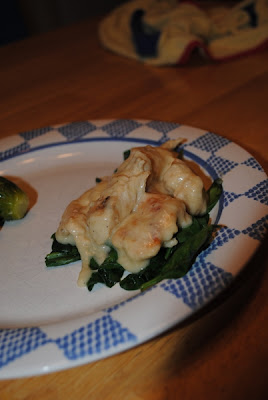 Season Turkey (or chicken) with salt and pepper.  In a large skillet, saute turkey in oil for 6-8 minutes or until no longer pink.  Remove with a slotted spoon and set aside.

In the drippings, saute the garlic until tender.  Stir in the flour, broth and wine until blended.  Bring to a boil over medium heat; cook and stir for 1-2 minutes or until cheese is melted and sauce is blended.  Add turkey; heat through.

In a large saucepan or dutch oven, cook spinach in water for 3-5 minutes or until wilted; drain.  Serve turkey mixture over spinach.
Posted by Jenny at 6:00 PM No comments: 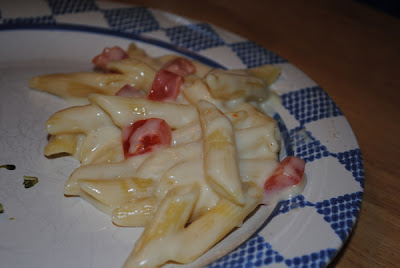 Cook the pasta according to package directions.  Meanwhile, in a dutch over, melt butter over medium heat.  Stir in flour until smooth; gradually add the milk.  Bring to a boil; cook and stir for 2 minutes or until thickened.

Reduce heat to medium.  Stir in the cheese, salt, mustard and pepper.  Cook and stir until the cheese is melted.  Drain pasta; stir into cheese sauce.  Cook and stir for 3 minutes or until heated through.  Stir in tomatoes just until combined.
Posted by Jenny at 6:00 PM No comments:

This doesn't look like much, but it sure was tasty. 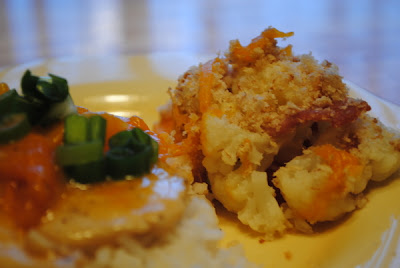 Place cauliflower in a large saucepan and add 1 inch of water.  Bring to a boil.  Reduce heat; cover and simmer for 5-10 minutes or until crisp tender.

Cover and bake at 400 degrees for 10 minutes.  Uncover and sprinkle with cheese.  Bake for 5 minutes longer or until cheese is melted.
Posted by Jenny at 6:00 PM 1 comment: