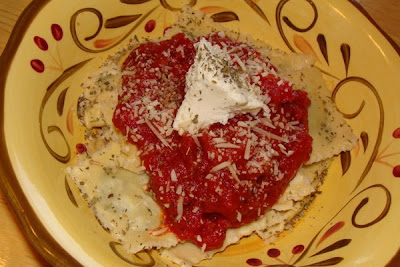 To prepare the filling, heat olive oil in a large pan over medium heat. Saute shallots and garlic for 7-10 minutes or until they are soft and translucent, but haven't browned. Add arugula, turning and stirring it frequently, until it had cooked down and its water as mostly evaporated, but it hasn't lost its color, approximately 3-5 minutes. Let the mixture cool, then add the bread crumbs and romano cheese. Season filling as needed with salt and pepper. Add the egg yolk, stirring mixture until well combined. Set aside.

Fill prepared pasta dough as directed by manufacturer if using a pasta machine/ravioli maker. Or, if using wonton wrappers, line a cookie sheet with foil and spray it with Pam. Lay wonton wrappers on cookie sheet a few at a time. Brush wrappers with egg white. Spoon a generous tsp. of filling in the middle and fold wonton in half diagonally. Press edges firmly to seal.

Cook Ravioli in boiling water a few at a time so they don't stick to each other. Typically they are done when they start to float, it only takes a few minutes. Serve with homemade pasta sauce.