WOW. The picture doesn't make it look good, but WOW! This took a max or 20 minutes from start to finish to prepare and my husband was raving up and down about it. I must admit, it was pretty darn good. I should have claimed that it took hours and I slaved over it with just little ole' him in mind. 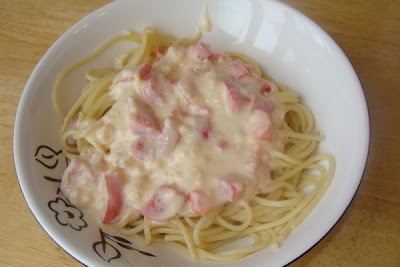 12 oz. fettuccine pasta
2 red bell peppers, julienned (I just pulled some from my freezer and they were chopped, so that is what I got. Clearly it doesn't change the taste.)
3 cloves garlic, minced
1/2 small onion, minced (these weren't in the original recipe)
3/4 tsp. cayenne pepper (I cut it down to a scant 1/2 tsp. so that it wouldn't be too spicy for my kids.)
1 cup fat sour cream
3/4 cup chicken broth (I only used 1/2 cup so that it wasn't too runny.)
3/4 cup grated parmesan cheese (I added a little bit more to thicken it up a bit)
salt and pepper to taste.

Stir in the sour cream and broth. Simmer uncovered for 5 minutes. Remove from heat and stir in cheese.

Toss hot pasta with sauce and season with salt and pepper to taste.
Posted by Jenny at 5:00 PM