This was my first time trying my hand at making Gnocchi and I think that it turned out pretty good. Things I learned: cut the Gnocchi a little bit smaller and cook them a tad bit less time. 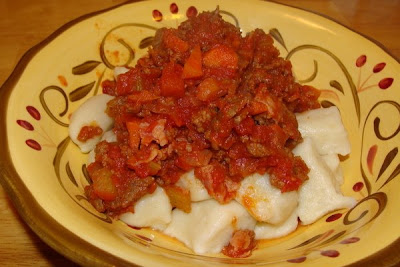 From: Janet is Hungry

Add the egg and butter. Begin adding flour, a handful at a time until the mixture forms a soft dough that can be worked, but is not sticky. (I gave up on the whole not sticky bit, mine was always a bit sticky and I didn't want to overdo the flour, so I just stopped with about 1 1/4 cups of flour and will likely stop before that next time.)

Divide the dough into 4 smaller balls and roll out on a floured surface into a 1" diameter log. Cut into 1" sections, they will look like little pillows. (Like I said above, I would make these a little bit smaller next time.) Cover with a tea towel and let sit.

Bring a large pot of water to a rolling boil and add salt. Drop the gnocchi in batches into the water. Cook until they float, about 2-3 minutes. Scoop them out and add the next batch. Serve warm with the meat sauce.

Saute pancetta with onion, carrots and celery. When the onions are almost cooked, add the beef. Cook until beef is no longer pink.

Add the wine and simmer until mostly reduced. Add the tomatoes and about half of the beef broth. Simmer for about 2 hours adding more broth if the sauce is starting to dry out. (I didn't have the time for the 2 hour reduction, so I just add the half of the broth and simmered for about 30 minutes and never added the remaining 1 cup of beef broth and the sauce was still divine.) Add salt and pepper to taste.
Posted by Jenny at 5:00 PM

gnocchi is my favorite! i found a really yummy ricotta gnocchi recipe a couple years ago and i can no longer find it! but ive been fiending for it:)

i used to make gnocchi w/my greatgrandmother when i was a child. i even have a gnocchi board,, which doesnt get used much but i still love it.