These are to die for. I kid you not that these are one of the most amazing pumpkin desserts ever. I got this recipe from a friend of mine whose blog I linked below, although this recipe is not on her blog. 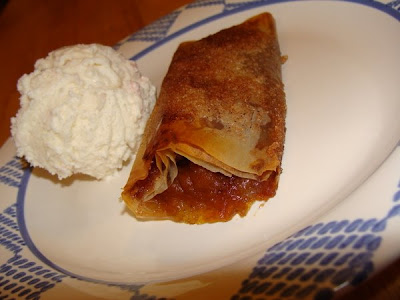 From: The Franson Kitchen

In another small bowl, combine 1 cup sugar and 4 tsp. cinnamon.

Place 2 sheets of phyllo dough on top of each other. Slice sheets in half lengthwise to make two long strips of dough. Keep the remaining dough covered with plastic wrap or a very slightly damp paper towel or the dough will get brittle and crack. Brush the top sheets of dough with the melted butter. Sprinkle heavily with cinnamon sugar. Place a slice of cream cheese 2 inches from the top of the dough. Spoon a dollop of the pumpkin mixture on top of the cream cheese. Fold the top edge down over the mixture and roll . Place each struedel on a baking sheet, seamside down. brush with some of the melted butter. Sprinkle generously with the remaining cinnamon sugar mixture.

Bake for 15 minutes or until the phyllo is golden brown. Top with cool whip.

To reheat: After removing from the fridge, place on a greased cookie sheet. Put in a 400 degree oven for 10 minutes. (I usually just pop mine in the toaster oven or microwave. They just don't keep the cripsy outside if you stick them in the microwave)
Posted by Jenny at 5:00 PM