This was stellar! I can't wait to make it again, but then again, I love anything with asparagus. 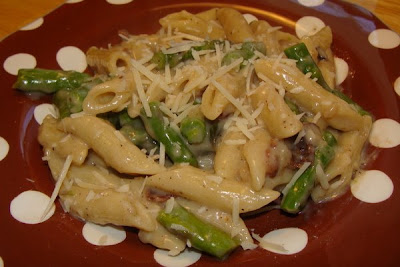 Boil water in a large pot. Place the asparagus in the boiling water and cook for 2 minutes. Remove and cool asparagus by running under cold water, set aside.

Cook the penne in the pot that you cooked the asparagus in for eight minutes. Strain and toss with 1 Tbs. of the olive oil.

Cook bacon in a large skillet over medium heat until crispy. Reserve 2 tsp. of the bacon drippings in the pan. Chop the bacon into large pieces, and saute for 3 minutes with the garlic and the onions. Take off of the heat and set aside.

Combine soup, milk, water, parmesan cheese and black pepper. Mix well. Add soup mixture and cut asparagus to the bacon and onions. Bring to a boil and stir in penne, coating pasta evenly with the sauce.
Posted by Jenny at 5:00 PM