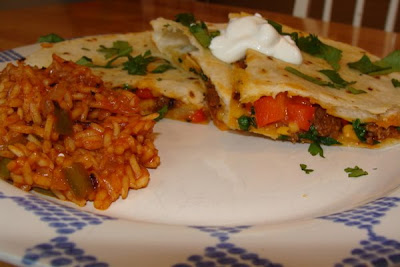 Prepare the chorizo in a skillet and set aside.

In a heavy skillet hat olive oil at a medium hight heat. Add corn, cook until it starts to toast about 5 minutes. Add peppers, onion, cumin, salt and pepper. Saute until the onion begins to soften, and add cilantro, toss and set aside.

Remove from skillet when both sides are golden brown. Slice into wedges.

In a heavy pot, saute onion, green pepper and garlic until onion is softened. Add rice to pot and cook over medium-high heat until rice has browned. Add tomato sauce, chili powder, salt and beef broth. Bring to a boil; cover, lower heat, and simmer until liquid has been absorbed, about 20 minutes. Taste and add more salt if needed.
Posted by Jenny at 5:00 PM