I've been on a major soup kick lately. So, you'll see at least 3 new soups coming up here. They were all fabulous.

The reason that this particular recipe was awesome is that it was literally 30 minutes start to finish. Stuff like that makes me positively giddy. I have to admit that the recipe called for quite a few ingredients that I've never purchased before. But the good news is that this soup was so good that I'll definitely be making it again and get to use the the rest of the ingredients.

We ate it over rice in order to stretch it a little farther. While it says this serves 4, I think it's a very lean 4. Doubling it would definitely give you some good leftovers. 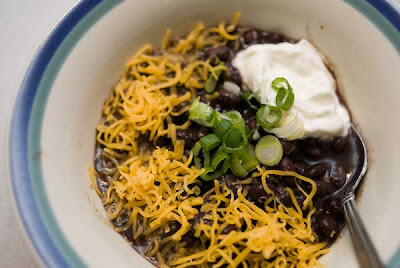 1. In saucepan on medium, combine all ingredients. Bring to boil, lower heat and simmer uncovered until desired consistency, about 10 minutes. Discard bay leaf. Garnish with onions.
Serves 4
Posted by Alissa at 6:00 PM