This ice cream was so yummy. The maple tuiles truly add something special to the flavor. As well, they add a little crunch. Tab called them ice cream chips and it fit. 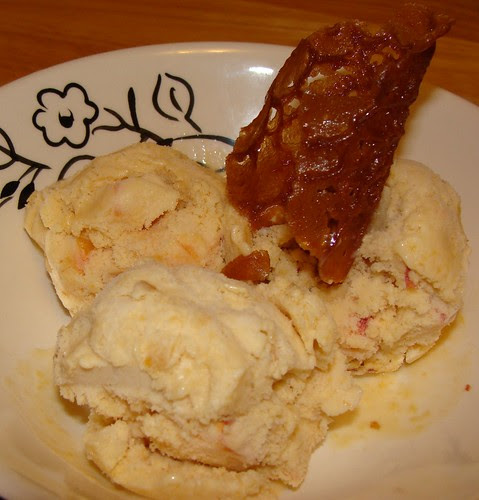 Chop 2 of the peaches into 1/2" chunks and toss in a small saucepan. Add the honey and bring to a boil over a low heat. Cover the pan and cook until the peaches are soft, about 10 minutes. Scrape the mixture into a blender or food processor and puree. Set aside.

Bring milk and cream to a boil in a saucepan. Meanwhile, whisk together the yolks and sugar until blended in a beatproof bowl. Drizzle in a litt of the hot milk mixture to temper the eggs; make sure they don't curdle. Slowly add the rest of the milk mixture. Pour the milk and egg mixture back into the saucepan and heat while stirring until it thickens. Remove from the heat, pour into a heatproof bowl, and stir in the vanilla and peach puree.

Regrigerate the custard until chilled. Scrape into the bowl of an ice cream maker and churn according to the manufacturer's instructions. While the ice cream in churning, dice the remaining 2 peaches into fingertip sized pieces and add them just before ice cream is thickened. When ice cream is ready, pack into a container and freeze for at least 2 hours or until it is firm.

Beat the butter and brown sugar and maple syrup together in a large bowl. Stir in the flour, mixing until incorborated. Cover the bowl with plastic wrap and regrigerate for at least 3 hours.

Roll small bits of dough between your palms to form small balls, about the size of marbles and place them a few inches apart on an ungreased baking sheet. Bake for 5-7 minutes at 400 degrees until they are golden brown and honeycombed.

Remove from the oven and let them sit fo about a minute and immediately lift them from the sheets with a thin metal spatula. (They have to be cooled just enough to be able to hold together but not so much that they are already brittle). Quickly lay them on a rolling pin or slender bottle to form them into curves. If they stick or harden too quickly on the sheet, place them back in the over for less than a minute and they will loosed up again.
Posted by Jenny at 5:48 PM

someday. when i have a HUGE kitchen again, i'll buy an ice cream maker. until then, i'll just sit here and drool.