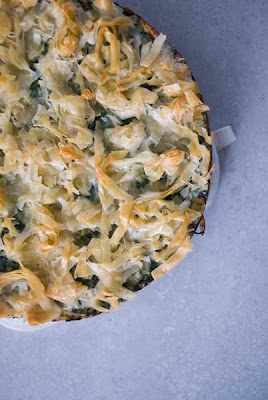 I was a bit nervous aboout this recipe mostly because it's unlike anything I've ever made before. I wasn't sure if I'd like it, let alone the kids. But I was pleasantly surprised. It's very Greek, what with all the spinach and the feta and the phyllo dough. And I was a bit concerned about us actually finishing the entire thing. However, I needn't have worried. Even the leftovers were yummy.

This is another recipe from Martha Stewart's Dinner Tonight blog. I've really enjoyed every recipe I've tried from there so far, and they're not super snooty, which I love. However, they give you the quantities to make two pies (one intending to be frozen and cooked later) but I didn't want to make a second pie, so I'm posting just the recipe for one pie.

1. Make the filling: In a large nonstick skillet, heat 2 tablespoons oil over medium-high heat. Add onions, and cook, stirring occasionally, until translucent, 3 to 5 minutes. Add garlic and 1 teaspoons salt; cook until garlic is tender, 1 to 2 minutes.
2. Transfer mixture to a large bowl; stir in spinach, feta, Parmesan, breadcrumbs, dill, 1 teaspoons salt, and 1/4 teaspoon pepper. Fold in eggs until combined.
3. Place mixture into a 9-inch springform pans or 9 1/2-inch deep-dish pie plates; press firmly to flatten.
4. Make the topping: In a large bowl, gently toss sliced phyllo to separate, then toss with remaining 1/4 cup oil until coated (I used 1/4 cup, and thought it was WAY too much oil. I'd half it, at least).
5. Cover the tops evenly and completely with the phyllo dough. (To freeze, cover pies tightly with plastic wrap, being careful not to flatten topping. Bake within 3 months; do not thaw first.)
6. Preheat oven to 375 degrees. Bake until heated through and topping is golden brown, about 1 hour 15 minutes for frozen pie (30 minutes for unfrozen pie).
Posted by Alissa at 7:27 PM

done...im addicted to greek food. it sounds like a cassarole dish of spanikopita:) now im officially craving this

you have no idea how much I love spinach pie. maybe even enough to try this. i said maybe.