Again we visit my love of the lime. Last Saturday, we went to the Farmer's Market here in Orlando. Yes, there's really only one. I couldn't stop drooling over the site of all that glorious fresh produce. So, I purchased a bucket of Key Limes.

I also happened to pick up How To Be A Domestic Goddess by Nigella Lawson. It contains a bunch of what look to be (since this is my first attempt) delicious recipes. It contains not one, not two, but THREE recipes for Key Lime pies. The stars aligned.

In her introduction to the recipe, Nigella (we're on a first-name basis) states, "although there is little chance of using fresh key limes..." Ha! I've got them here in my hot little hands, Nigella! So take that! The point is that you don't have to use key limes. Regular limes are just fine (and won't leave your fingers cramping from juicing them.)

Now, I think my lack of a decent mixer is where I screwed this recipe up. I mean, it was delicious, and we had NO PROBLEM devouring it. However, I'm fairly certain it's supposed to be taller than 3/4 of an inch. I *think* I needed to beat the egg whites longer. And well, my arm was tired. So, don't be like me. Beat your eggs longer. 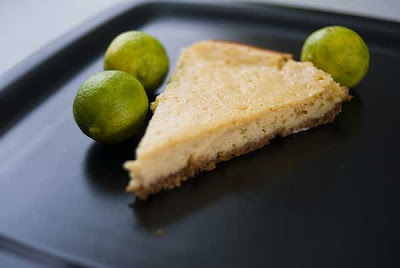 for the crust:
3/4 c plus 2T graham crackers
1/4 c softened butter
1 tsp cocoa (She suggested this in her notes on the recipe, I'm not sure 1 tsp is enough to make the crust taste chocolatey)
9 inch springform pan

Preheat the oven to 325 degrees and put in a baking sheet.

Put the graham crackers and butter into the food processor and blitz till all's reduced to oily crumbs. Press these into the pan, lining the bottom and going a little way up the sides, and chill while you get on with the rest.

Beat the egg yolks until thick, add the can of condensed milk, grated zest, and the lime juice. Whisk the egg whites separately until soft peaks form, then fold gently into the yolk mixture. Pour into the lined pan and cook for 25 minutes, when the filling should be firm. It may puff up and then, on cooling, fall, but that's the deal. Leave to cool on a rack before unmolding, and chill well.

I have several other recipes and more key limes waiting. Aren't you lucky?
Posted by Alissa at 8:15 PM